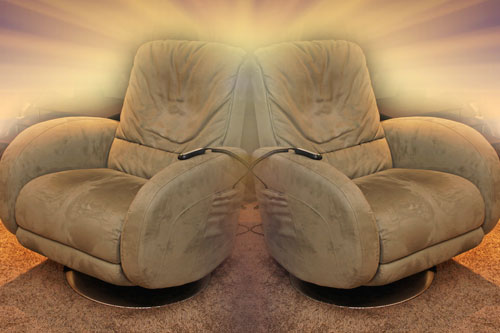 “It all started with a chair.” So declared actress Ellen Page in the critically acclaimed film, Juno. Now in Juno, the whole teenage drama (Juno’s pregnancy) unfolds around one irresponsible evening involving, you guessed it, that chair. Was there a message? Most assuredly: don’t leave your teenage daughter unsupervised! As a Rabbi, I must confess, I never thought I would be borrowing a line from a film about teenage angst, but here it goes, “It all started with a chair.” Let me explain.

Two days ago I took my blessed family vehicle to a car wash and like any good citizen, sat waiting in the designated sitting area patiently awaiting my car’s return. Not more then 3 minutes had passed when the most annoying ear-penetrating sound I had ever heard (think car alarm but high pitched) began ringing in the area I was sitting. Let’s just say that any illusion of tranquility was gone in an instance. The seconds ticked by but no one came running to fix the ringing problem, so I did what any annoyed person would, I stared menacingly at the three workers washing the vehicle from which I could swear this blasted evil noise was emanating. Some thirty seconds later an attendant approached me saying, “Sir, would you mind getting off that massage chair, it beeps when you don’t pay?” Naturally, I jumped off that massage chair, apologizing profusely for my lack of discernment. Wow, the whole time it was me. I was the noise! That got me thinking, how often do we hear “noise” coming from others, forgetting altogether to first examine ourselves? How often do we project blame on others for the noise we create? The answer: all the time. See, I told you it began with a chair!

From a Torah perspective this practice of projecting blame is particularly problematic, seeing as our Sages have cautioned, “Beautify yourselves and only then others,” i.e. first fix YOU, and, only after, others - the greater world. If we constantly blame others, shift the responsibility away from ourselves, how can we possibly do the inner work needed (and prerequisite to) the fixing of the greater world? To remedy this problem, the Ba’al Shem Tov (founder of the Chassidic movement), teaches, “View each and every person as your mirror,” i.e. a reflection of yourself. Hence, if I happen to see (or become aware of) someone else’s inadequacy, I should immediately turn inward and search (until I find) its manifestation in myself.

To give an example:

Let’s say I become aware that my neighbor  engaged in thievery. Following this “mirror principle” of the Ba’al Shem Tov, I should avoid joining those who would immediately point their finger and condemn, but instead, look to discover where I too share some of that taint. Perhaps, as an example, I am guilty of stealing time, of wasting someone else’s precious time (I was late or I didn’t show up). Perhaps, I am guilty of wasting God’s time, of not using my time on earth wisely - to carry out my Divine mission. Either way, if I search deeply within myself, I can find a way to relate to my fellow. Such awareness not only negates idle chitchat (me speaking badly about my neighbor), but provides a clear path toward rectification - improving myself.

In short, heaven shows us flaws in others that we may repair (that quality) in ourselves!